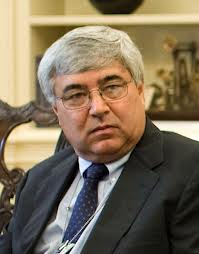 At the end of December, one of the longest serving presidential advisers to President Barack Obama will be leaving the White House.

Pete Rouse, who has worked for Obama since the President was a Senator in Illinois, is scheduled to leave as part of a White House administration shake up due to the problems with the healthcare roll out.

Obama said it would be a tough loss when Rouse leaves. The President said he completely trusts Rouse. He called Rouse a model of discretion who has no ego and is as wise as anyone is.

Obama did say he would continue to speak to Rouse during the rest of his second term in office.

However, poll numbers for Obama have reached a low point for his time in the White House due to the rough start for the health care plan enrollment, referred to as ObamaCare.

Obama has also added familiar faces to his staff at the White House. Phil Schiliro is returning for a short appointment to help with the ObamaCare problems.

Schiliro was an aide for many years to Henry Waxman the Congressman from California and has worked for Tom Daschle, the former Senate leader for the Democrats.

John Podesta also returned for an assignment of one year to focus on energy and climate issues.

Josh Earnest a spokesperson for the White House said that departures at year-end, such as Rouse’s, are traditional for those staff that is in positions of high stress. Earnest said the departures should not be looked at as a condemnation or a commendation of their work.

Rouse, who is known for not liking the spotlight, has worked skillfully behind the scenes since first starting to work for Obama in 2004 as his chief of staff following Obama’s election to the U.S. Senate.

Rouse graduated from the London School of Economics and had worked since 1971 in the Senate, including for Daschle for 19 years.

Rouse and Podesta formed a part of the team that helped fill key staff roles for Obama when he first entered the White House in 2009.

Rouse was also interim chief of staff for Obama when Rahm Emanuel left in 2010 to run for the Chicago Mayoral position.