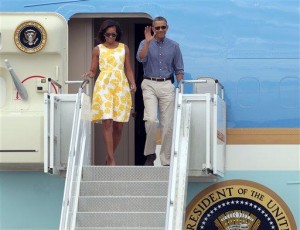 A tabloid in the U.S. recently reported that Michelle Obama was in the process of filing for a divorce. Another daily has said the first couple sleeps in different bedrooms. However, the reports are said to be highly questionable and greatly exaggerated, since no official statement have been given over the rumor.

The National Enquirer, the tabloid that made the report is known to stretch the truth. No other tabloid or newspaper in the U.S. has made such a report.

According to the report, Michelle Obama wants to kick her husband out of their Chicago home. A source told the Enquirer that the marriage was doomed. The source said the couple has had a difficult time for a number of years and stayed together for the most part for their two daughters and the President’s political career.

However, some say that Michelle is very upset and has met with her lawyers over a divorce and told the President she wanted to live apart. One report, yet to be confirmed, said that Michelle would remain living at the White House due to appearance sake but the two would live separate lives.

According to the rumor, Michelle will live in a vacant bedroom in the private living area for the first family. The National Enquirer article also alleged that the first lady was preparing to have all of President Obama’s clothes removed from their ritzy home in Chicago.

Allegedly, the last incident to upset Michelle Obama was when her husband was speaking at Nelson Mandela’s memorial with Helle Thorning-Schmidt the prime minister of Denmark.

The last time problems amongst the first couple took place in the White House was with the Clinton’s during the 1990s. Hillary and Bill Clinton did not divorce because of the former president’s alleged infidelity.

However, there are similarities between the current first lady and Hillary Clinton. Both put aside successful lawyer careers so they could help their husbands.

As public figures, the Obama’s must be under the microscope every day. Until the White House makes an official statement denying the rumors or announcing that they are true, the world will go on wondering what the truth is.

Royal Bank of Canada Upgraded to “Hold” at ValuEngine