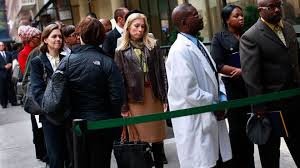 On Saturday, the long term unemployed in the country will have their federal unemployment benefits cut off. That is in despite of President Obama offering support to the two senators that have proposed the extension of the federal jobless benefits.

Senator Jack Reed a Democrat from Rhode Island and Senator Dean Heller a Republican from Nevada have proposed an extension for three months in benefits that more than 1.3 million people in the U.S. will lose. Obama spoke to both Senators on Friday describing the situation as an urgent priority.

The President has said the White House would push Congress to promptly act through bipartisanship to address the urgent economic priority.

The president said the cut-off, which is very abrupt, in cash assistance amidst the holidays could hurt the growth of jobs and the economy.

Gene Sperling an economic adviser to Obama said the Senate would vote on a new proposal once Congress returns in January.

The total amount of people that would be cut off is estimated at 1.3 million. Over 210,000 are people living in California, which should increase to more than 500,000 by June. Over the past 12 months, people in California have received over $4.5 billion in federal unemployment benefits, much of which is put back into the different economies.

These benefits were first started by George Bush and were designed to help millions of citizens in the U.S. who had lost jobs during the recession and failed to find a new one while getting jobless benefits. In the majority of states, unemployment benefits run out in six months.

By the end of June, another 1.9 million Americans are expected to lose their unemployment benefits.

Republicans as well as some of the Democrats would likely want a proposal to extend the unemployment benefits. Many in Congress however believe with the jobless rate at 7% and signs of economic growth, that the additional benefits are no needed.