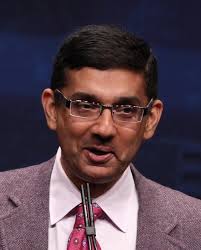 Federal agents plan to arrest Dinesh D’Souza a political commentator who is outspoken. The government plans to arrest him on Friday in New York City over the allegations that donations he made to a failed candidate for the U.S. Senate exceeded the limits of campaign-finance laws.

Investigators built the indictment against the political commentator who is a best-selling author and filmmaker, based upon the claims he had made a $20,000 covert donation to the U.S. Senate campaign of Wendy Long in 2012. Long is a Republican from New York.

The federal indictment alleges that D’Souza, who is 52, used deception through straw donors to donate his funds, and then misreported the source of his campaign cash.

Long lost by a landslide 44% in the Senate election in 2012. She raised just $785,000 in her campaign and never posed a serious threat to the election of her opponent, Democratic Senator Kirsten Gillibrand.

Long and D’Souza are friends from decades ago, when they both attended Dartmouth College during the 1980s. Long is a successful attorney and was not implicated or even mentioned in D’Souza’s indictment.

A 2012 documentary by D’Souza title 2016: Obama’s America, criticized strongly the policies of the president and suggests that rage influences decisions made by the president. In the documentary, D’Souza visits Africa to interview the half brother of Obama, George Obama who reproaches his sibling.

Gerald Molen, a producer who has won Academy Awards provided the funding for the documentary made my D’Souza. He claims the charges against the filmmaker are politically motivated.

Molen was a co-producer of Schindler’s List and added that his friend D’Souza has been a target before for an alleged minor violation. He compared this indictment to when the Internal Revenue Service harassed and targeted groups affiliated with the Tea Party movement.

Molen said in light of events that have happened recently and the way our IRS had been used, as a way to stifle dissent, the arrest of D’Souza should send shivers up and down the spines of all Americans who are freedom lovers.

The movie 2016: Obama’s America turned out to be a surprise smash at the box-office earning over $33 million in box office receipts.

Currently, the documentary is the second most popular documentary that is political in American history only trailing Fahrenheit 9/11 from 2004 by Michael Moore the leftist documentarian.