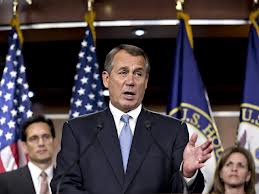 The Republican leadership in the House of Representatives will call for a pathway to legal status this week in its framework for immigration reform legislation. However, the path will not include citizenship for many of the adults amongst the nearly 12 million undocumented immigrants living in the U.S.

For those immigrants brought into the U.S. illegally while children, the Republicans would make a pathway to citizenship.

However, even prior to the plan being unveiled, some of the leading strategists in the party and its conservative voices have urged that the push for immigration reform be delayed until 2014 or abandoned to avoid any rupture inside the party prior to this year’s midterm elections.

Republicans have seen the support from Hispanics plummet due to their stance on the immigration issue and that could become even worse by pushing back the agenda until next year.

The Republican’s statement of principles criticizes the system of higher education in the U.S. for educating some of the brightest and best students in the world only to lose them to their country of origin since they cannot obtain legal residence.

With concern brewing already amongst conservatives who say any form of legal status is amnesty, the Republican plan has more of a feel of a way to test the waters than of a blueprint of how to move forward.

The plan will be circulated by the leaders of the Republicans in the House during a retreat of three days that starts in Maryland on Wednesday.

Several organizations that are pro-immigration have been briefed over the guidelines and say the Republican’s intent is not a starting point for any further negotiations by conservatives, but rather used as a gauge of how far left the Republicans in the House are willing to go.

The principles said that Republicans are not supportive of a pathway to citizenship, but will make an exception for those in the “Dreamers” group, the immigrants that came to the country as young children with their parents.

Even the strongest proponents of an overhaul in the immigration laws are cautiously optimistic at best. Last June the Senate passed legislation with bipartisan support that included a path for citizenship of 13 years for the undocumented immigrants illegally residing in the country.

Roivant Sciences Shares Gap Up to $3.70