Billionaire in San Francisco Spending Millions for Races in 2014 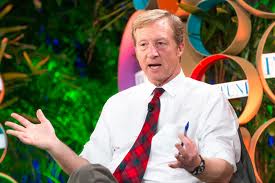 Tom Steyer, a billionaire in San Francisco is ready to reshape the political map in the U.S. with word the environmentalist activist might spend as much as $100 million in the midterm elections to be held this year across the U.S. where climate change is a big issue.

However, while there might be cheer from environmentalists that the former CEO at Farallon Capital hedge fund and the leading opponent of Keystone XL the proposed pipeline is putting even more money through his political action committee, Government watchdogs said this was another worrisome sign that the law allows wealthy individuals to carry an outside voice in politics.

Steyer, who is 56, is taking complete advantage of the decision by the United States Supreme Court referred to as Citizens United, which gives corporations, individuals and labor unions the right to spend an unlimited amount on political campaigns.

Now the wealthy not only can saturate the airwaves through advertising, but also can shape what candidates enter a political race, said analysts.

Steyer is worth over $1.5 billion and has been active in California politics for years. The Democrat, who is very outspoken, spent over $30 million on Proposition 39 in 2012. That proposition closed corporate loopholes. He also put more than $1 billion in the state’s coffers for clean energy and education.

Earlier in 2014, he announced his desire to put a severance tax on oil on the 2014 November ballot in California that could generate more than $3 billion from the energy companies.

However, on Monday, Steyer said he intended to increase his spending nationally through his Super PAC NextGen Climate Action.

He declined to give an outline of a budget for his group and would not confirm that he is intending to match $50 million from other donors.

He said he did not know if it would take over $100 million, but considers that a cheap price in answering the world’s generational challenge.

A source that is close to his organization said Steyer’s group might get involved in more than 10 races in 2014, but the list has not been finalized.