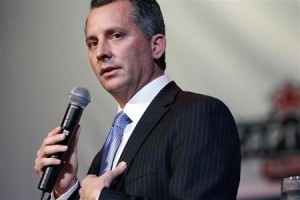 David Jolly a Republican narrowly won a special election in Florida, defeating Alex Sink a Democrat on Tuesday in a House race seen largely as a critical litmus test for ObamaCare.

The special election was to replace Bill Young the late Representative. The race was close from the start and considered a tossup. Analysts called it a bellwether and testing ground for the messaging strategy of each party, which revolves in a big way around ObamaCare.

The election headquarters for Jolly erupted with cheers when it became clear the Republican had won. During his victory speech, he struck a conciliatory tone and expressed gratitude for Young his mentor and his family.

Jolly thanked Overby and Sink and called it OK that thousands and thousands had voted for his opponents.

At the same time, Republican groups across the nation used Jolly’s win as a hit against ObamaCare and those supporting it.

Sink’s party in St. Petersburg was subdued. Sink, flanked by her children started her concession speech by giving thanks to her campaign team, as well as thousands of her volunteers who helped in her bid to reach Congress.

Jolly was a former Young aide and spent millions in campaign funds hammering Sink over ObamaCare.

Sink narrowly lost the governor’s race in 2010 to Governor Rick Scott the incumbent. She cautiously embraced the healthcare law while insisting it needed urgent fixing. She played down during the campaign its importance in the special election.

Over $11 million was spent on the race and heavyweights like President Clinton and Paul Ryan, the former candidate for the vice presidency in 2012 helped in the campaigning.