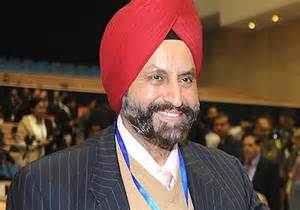 When Senator Hillary Clinton was running for U.S. President in 2008, a very enthusiastic supporter financially was Sant Singh Chatwal, owner of hotels and restaurants and an Indian-American. His relationship with Clinton dated back a number of years.

Chatwal had been a regular at events the Clinton campaign held in New York. He was both a gregarious and genial presence donning a red turban. In Clinton’s campaign for the U.S. Senate in 2000, Chatwal contributed over $200,000, when soft-money donations that were unregulated were still allowable.

Both former President Bill Clinton and wife Hillary, as well as Rep. Richard Gephardt a Democrat from Missouri and Senator Charles Schumer a Democratic from New York, were wedding guests at Chatwal’s son Vivek’s wedding on 2002 at Central Park’s Tavern on the Green.

For the presidential run of Hillary Clinton, Chatwal raised over $100,000 more. However, it turns out now that much of what he was able to raise was tainted, a product of a straw donor scheme where Chatwal illegally reimbursed the contributions given by the donors.

On Thursday, Chatwal made a plea of guilty in a Brooklyn District Court to skirting the laws for federal campaign contributions and for witness tampering. He admitted to funneling over $180,000 from 2007 to 2011 in illegal contributions to Kendrick Meek of Florida, Christopher Dodd of Connecticut and Hillary Clinton.

Chatwal is the owner of Chatwal and the Dream hotel chain and the Bombay Palace chain of restaurants. He has for a long time had a cloud over legal and financial problems in India and the United States. He filed bankruptcy on two occasions, faced bank fraud allegations and owed millions in back taxes.

Chatwal, who is 70, could face as many as 25 years behind bars. It is not difficult to figure out Chatwal’s motivation for his contribution scheme.

In a taped conversation with an informant with the government he said when you give money they are always behind you and that is the only way to buy them.

Chatwal has been a regular at state dinners in Washington and even had a private dinner in India with Hillary Clinton.