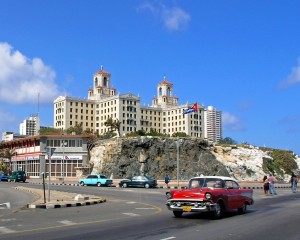 n advocacy group has called for the U.S. to change its decade’s long policy toward the Caribbean nation of Cuba. On Monday, it launched a campaign on television and had posters on the metro system in Washington, D.C. that showed President Obama and urged him to stop putting off the changes.

The ads on the metro by #CubaNow are made to highlight the economic changes taking place in Cuba. The group’s belief is the U.S. embargo of 52 years against the tiny island nation is no longer working.

The director of #CubaNow Ric Herrero said it was time for the policy between the U.S. and Cuba to be brought into the 21st century.

The group announced that its mission, unlike other policy groups on Cuba, was focused specifically on changing the thinking of the U.S. about its Cuba policy.

While the advocacy group opposes the ongoing embargo, it has recognized that overturning it through Congress is a near impossible battle and that there were other ways in which policy can be changed, such as allowing any American to visit the Caribbean island nation.

Andres Diaz, one of the founding members of #CubaNow and a former official at the Commerce Department with the Obama administration who was born in Cuba says there is plenty the president could do within his own executive authority.

The launch by the group coincides with 5th anniversary of the White House’s 2009 step of allowing travel freely by Cuban-Americans to see relatives living in Cuba as well as sending them remittances.

That shift in policy ushered in more change than was seen in over 50 years previous to that, said the group in its press release.

Herrero announced that the group, which is based in Washington and Miami, wants the Obama administration to take steps to encourage the growing private sector in Cuba, which has emerged under the economic reforms that have slowly been introduced by the government of Cuba.

Cuba has announced a number of new reforms. This past week it loosened the regulation of its largest companies that are state run including tourism, telecommunications and minerals.

In February, a poll by the Atlantic Council found that most Americans support the normalization of relations with the tiny island nation just 90 miles to the south of Key West, Florida.