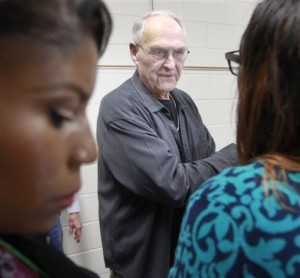 An elected official from a small town in New Hampshire was in a restaurant in April when he used the opportunity to give his verbal opinion of U.S. President Barack Obama.

Robert Copeland, a police commission member in the town of Wolfeboro, New Hampshire spoke out in a raised voice that he hated watching the television since every time it is turned on all he sees is that f—– n—–.

A witness who was appalled at the language, who was not aware who Copeland was asked if he was only throwing around the n-word. Copeland responded, “Yeah.”

The witness, a woman, later spoke to the media about the incident, but Copeland has decided to make an insane and bold decision to own up to the comment.

A newspaper in Concord, the state capital, reported that Jane O’Toole the witness wrote the town manager a letter, as well as the fellow board members of Copeland’s on the police commission.

The note was returned to O’Toole from Copeland, who wrote with high levels of racism.

Copeland said that while he believed that the problems with minorities in the U.S. are momentous, he was not phobic. He wrote that his derogatory use of slang in reference to those amongst them that are undeserving of respect is not a secret.

He called it an exercise of using his 1st Amendment rights. He said he did use the N-word in reference to the White House’s current occupant and does not apology as he meted and exceeded his criteria for such.

The controversy was increased more by Joseph Balboni the chairman of the commission who added he thought it was crazy, saying Copeland was a good person, generous to Wolfeboro and has worked with a number of blacks during his lifetime.

Balboni referred to Copeland’s remark as just a casual slur that was being blow out of proportion by O’Toole.

Nevertheless, O’Toole is gathering people together to call for the resignation of Copeland during a meeting of the police commission. The town has a police force of 6,300 but just 20 African Americans, of which none are on the police force.