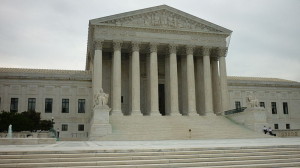 The Supreme Court of the U.S. will decide soon how far the free speech concept protects those who abuse or threaten on sites that are social media.

The court has taken on the Anthony Elonis case. Four years ago, he ranted on Facebook about his at the time estranged wife. The man from Pennsylvania posted a note about his spouse.

His post said he had no way in which to love his wife but had a thousand ways in which to kill her. He wrote that he would not rest until her body was soaked in blood, a mess and dying from little cuts.

The message rang a number of alarms bells, which was not surprising. One of the contacts for Elonis on Facebook, his former employer, went to police about the message on Facebook. However, it did not stop there.

After Elonis was paid a visit by the FBI a new message appeared.

He said the FBI agent was very close to him and it took all the strength in the world not to slit her throat.

Shortly thereafter Elonis was given a sentence of four years for the threats.

Elonis said his posts were artistic and nothing more than lyrics for a rap song. He said there was no intention for the posts to cause harm

Elonis says that Facebook provided the outlet for him to release frustrations, caused by a situation he was going through at the time with his wife.

Because of that, he maintains he is protected by the First Amendment and has the right to free speech.

The jury, at his trial, had been instructed by prosecutors to find him guilty if there could be seen objectively that his posts had been threatening.

The defense for Elonis said message of those should be viewed subjectively since they are casual in nature.

The court said on Monday it would consider if conviction via threatening another requires a form of proof of the subjective intent by the defendant to threaten.