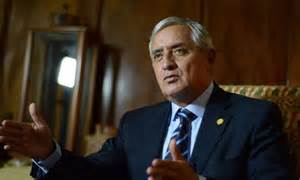 Otto Perez Molina the President of Guatemala said the best way to deal with the surge in unaccompanied children crossing the border between Mexico and the United States would be for the U.S. to implement a plan that is similar to the multi-billion dollar initiative Washington has in Colombia.

Perez Molina added that something must be done to deal with the ongoing crisis together, but to find the root of the problem and attack it, there needs to be something similar to Plan Merida or Plan Colombia that would be known as Plan Central America.

This type of plan would have to be given sufficient resources so that it could attack the problems that have caused the current humanitarian crisis.

The plan said the Guatemala President while in Washington, would provide countries in Central America with the funds to fight against violence and organized crime two of the biggest reasons way there are thousands of undocumented children from Central America traveling unaccompanied to the border of Mexico and the U.S. and attempting to cross undetected.

The leader of Guatemala made the remarks near the end of a meeting he held with Hugo Martinez the Foreign Minister of El Salvador and Juan Hernandez the President of Honduras, with members of the U.S. Senate’s Foreign Relations Committee.

Perez Molina announced as well that on Friday, during a meeting with leaders from Central America, hosted by U.S. President Barack Obama, he will make a proposal that Guatemala receive Temporary Protected Status which is a benefit that Salvadorans and Hondurans enjoyed in which the U.S. grants to those who cannot return back to their home countries due to natural disasters and civil conflicts.

The Guatemalan president said he would ask for it because both Honduras and El Salvador have that status and he believes it would be a big step for Guatemala.

TPS was authorized by the U.S. for Honduras and Nicaragua in 1999 because of Hurricane Mitch and for El Salvador following two earthquakes causing severe damage in 2001.