Walsh Calls an End to Campaign for Senate 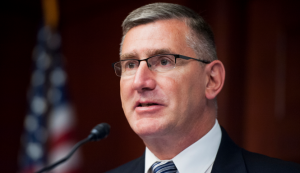 John Walsh the Senator from Montana is dropping his campaign due to an ongoing scandal over plagiarism. This gives Republicans a bigger edge in the critical race for an open seat.

Walsh said that his research paper from 2007 from his time at the U.S. Army War College had become too much of a distraction from the debate you deserve and expect.

Therefore, he said he was ending his campaign so he could focus on fulfilling a responsibility that was entrusted to me as a U.S. senator.

Walsh was facing a difficult battle against Steve Daines a Republican representative from Montana. However, that became even more difficult when a report in July said it appeared Walsh had copied a large portion of the thesis he submitted at the school in 2007.

He canceled events during the week amidst the rumors that became widespread that he would put an end to his campaign.

Walsh was facing increased pressure across the state to drop his campaign, with the two largest newspapers in Montana calling for him to stop his campaign this weekend.

The state’s former lieutenant governor, Walsh was appointed to the Montana senate earlier in 2014 to serve out Max Baucus’ Senate term.

He already was trailing Daines in most of the polls prior to the scandal breaking and one GOP poll on Wednesday found Daines with a lead of 13 points.

With Walsh no longer in the running, Democrats will be scrambling to find a candidate to replace him prior to the deadline on August 20.

The party scheduled a convention in Helena on August 16 to choose another nominee.

Democrats were already struggling for a candidate for this race after it was decided by Baucus that he would retire. A number of top choices for the candidacy including Brian Schweitzer the former Governor of Montana, turned them down.

Now finding one will be even harder.

Some Democrats have reached out to Nancy Keenan the NARAL Pro-Choice America President a former state official in Montana, about the senate race recently but she told newspapers she did not have any interest in running.

Schweitzer reportedly was not answering calls by local Democrats and late on Thursday ruled out entering the race through a public statement.