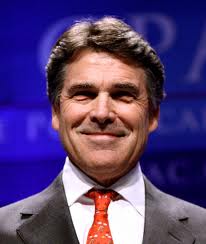 Rick Perry the Republican Governor of Texas responded on Saturday to his indictment in which he was accused of abuse of power of office. He called the indictment a political farce and vowed to explore each legal avenue to fight the prosecution.

A 2012 presidential candidate for the GOP, Perry with potential aspirations for a run in 2016, was indicted on Friday for promising to veto state funds of $7.5 million for an agency that DA Rosemary Lehmberg ran after she had pleaded guilty to driving while intoxicated in April of 2013 and would not resign.

Perry vetoed those funds after Lehmberg, who is a Democrat, who was videotaped during her arrest acting erratically, would not resign.

Perry said he thinks that Texans and the rest of American who have viewed the video tape agree that it is not the type of individual who should head an office that Texas wants to fund.

He added the he unequivocally and wholeheartedly stood by his veto and would explore each legal avenue he had to expedite the matter and bring the matter to a swift conclusion.

The governor said if the same thing were to happen again, he would make the same decision given the same circumstances and facts. He also was clear that he would have funded the unit if Lehmberg had resigned.

Within just hours of the indictment surfacing late in the afternoon on Friday, Republicans and Democrats began attacking or supporting Perry in the decision that was politically charged.

Many Republicans came to Perry’s defense, while most Democratic lawmakers appear as if they are going to stay out of that dispute at least for the moment.

However, the Democratic National Committee is already attacking. Similar to what it did when another White House 2016 GOP candidate Chris Christie the Governor of New Jersey answered questions regarding the connection his staff member and other political appointees had with the September of 2013 ordering of the toll lane closures that were unannounced that caused huge traffic jams on the George Washington Bridge and surrounding area.