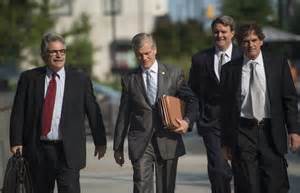 Bob McDonnell, the former Governor of Virginia will testify about the status of his marriage when his trial on public corruption continues in Richmond in a federal courtroom.

McDonnell testified on Wednesday and said Maureen, his wife, showed anxiety for the new role she held as first lady in 2009 just the day after he had been elected.

He was about to be asked by his attorney additional questions about his marriage when the judge adjourned the court, leaving that particular topic for discussion on Thursday.

The former Governor started his testimony with a reflection on the night of his election and a call on the phone he received from the President of the U.S. Barack Obama.

As McDonnell testified, jurors could be seen writing things down vigorously and taking many notes while hanging on each world he said on the witness stand.

While he was discussing donors to his election campaign, McDonnell said many doctors had become his friend and knew the first family personally.

McDonnell said that every person who contributes is looking for something, but some only want good, clean government.

A financial expert that the defense hired was hit hard by prosecutors while testifying on Wednesday.

The CPA was hired by the defense and started to discuss the financial health of the former first family of Virginia.

He attempted to show the McDonnells were sound financially when they were given loan from Jonnie Williams the CEO at Star Scientific.

He testified that McDonnell had credit available the same month they received the loan.

Another witness was James Burke who helped Mrs. McDonnell a former assistant left. Burke testified about a letter the staff at the mansion had drafted about leaving if intervention with the first lady of Virginia was not carried out.

Vonovia Given a €57.00 Price Target by JPMorgan Chase & Co. Analysts