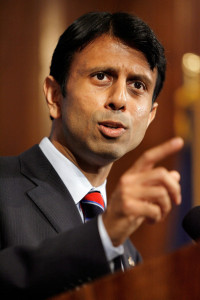 Bobby Jindal the Governor of Louisiana reportedly is set to sue the Obama administration on Wednesday in federal court. The governor claims that the U.S. Department of Education has manipulated illegally grant monies and regulations to force the states in the U.S. to adopt its controversial standards of Common Core.

A draft of the lawsuit was acquired by a worldwide news agency from the governor’s office.

In the lawsuit, Jindal argues the Department of Education’s grant plan of $4.3 billion effectively forces all states toward a path of national curriculum, which is a violation of the sovereignty of states in the Constitution. The suit also states that federal laws prohibit national control of the content of education.

The suit will request the judge to declare the actions by the department as unconstitutional and to prevent it from disqualifying any states from being given funds from Race to the Top based on the refusal of using Common Core.

The challenge in court puts Jindal, who has considered a presidential bid on 2016, at the head of the dispute between President Obama and conservatives, which bolsters the profile of the governor on issues, as he tries to court nationwide conservative voters.

Jindal in a statement said the U.S. government had hijacked then destroyed the initiative Common Core. The Common Core, added Jindal, is the latest effort by federal government disciples to eliminate state rights and put Washington in charge of everything.

The standards of Common Core are English and math benchmarks describing what should be known by students after each grade.

States developed them to allow for a comparison of the performance of students. Over 40 states, which include Louisiana, have adopted it.

When the education board in Louisiana adopted in 2010 the standards, Jindal was in support of them saying they were going to help the student be better prepared for their days in college and their careers.

Earlier in 2014, he reversed his opinion and now says he is opposed to the standards due to them being an effort of the White House to meddle into policy of state education.