Poll: Over Half of Americans Say Third Party is Needed in Politics 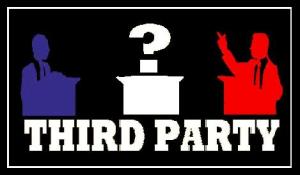 Over 58% of Americans have said that the United States is in need of a third political party due to the existing Democratic and Republican parties doing a poor job in their representation of the people.

A recent Gallup poll that was conducted in September showed that over half of the people in the U.S. continue to want another political party representing their interests.

Over 50% of Americans have kept this belief since 2007 with the two exceptions being during the fall of 2008 and the 2012 Presidential elections.

Of those polled, 71% of independents, 46% of Republicans and 47% of Democrats said they would support a third major political party in the U.S.

For close to all of the last 11 years, Democrats and Republicans have expressed strong support for a third political party.

When the presidency and both houses were held by the Republicans the Democrats had more inclination to have a third political party.

When the Tea Party started to take hold, the Republicans became more likely to support another strong political party in the U.S.

The poll of over 1,000 adults in the U.S. did not reach the historical 60% high calling for another political party as it did last October during the partial shutdown of the federal government after Republicans and Democrats could not agree on a budget and mandatory spending cuts took hold.

The first time a poll was conducted by Gallup asking if Americans would like a third party, was back in 2003. At that time, a majority of voters in the U.S. said they felt two major political parties were representing the U.S. public adequately. That first poll was the only time that a majority of American believed the two party system was adequately working.