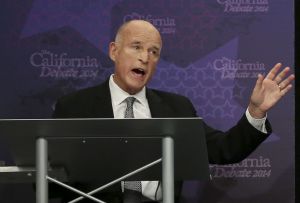 California Governor Jerry Brown said on Sunday that he had signed a new law making California the first state in the country to define when actually “yes means yes,” as well as adopt new requirements for all colleges and universities to follow when there is an investigation dealing with sexual assault.

Last month lawmakers in California approved a measure presented by Kevin de Leon a state senator from Los Angeles, as universities and state across the country are being pressured to change how rape allegations are handled.

Victims of sexual assaults on campuses and advocacy groups for women delivered petitions on September 16 to Governor Brown’s office urging him to sign the legislation.

Senator de Leon said the measure would begin a paradigm shift in the way college campuses across California prevent as well as investigate sexual assaults.

Instead of using the “no means no” refrain, the legal consent definition under the measure will require, “affirmative voluntary, conscious agreement to engage in any sexual activity.”

De Leon said that all students deserve an environment of learning that is both healthy and safe. California will not allow learning institutions to sweep any cases of rape under the rug. The conversation, added de Leon, of sexual assault has been shifted to prevention, justice and then healing.

The new legislation states that silence or a lack of resistance does not constitute consent. In this legislation, someone who is drugged, drunk, asleep or unconscious cannot give consent.

Lawmakers said that consent can be given via nonverbal means and that universities with policies that are similar have outlined different examples as moving closer toward a person or a nodding of the head.

Advocates for sexual assault victims supported the change as one, which would provide more consistency across all campuses and would challenge the thought that victims must resist assault to have complaints that are valid.

The bill will require training for all faculty that review complaints so victims are not being asked questions that are inappropriate when they file complaints.

The measure also requires access to both healthcare and counseling services amongst others.