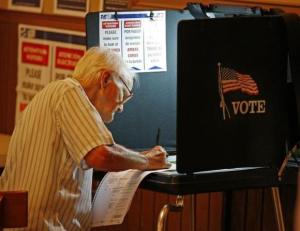 Republicans have become poised to gain seats to take control of the United States Senate in the midterm elections on Tuesday. The election outcome could be influenced heavily by the deep dissatisfaction of voters with the job performance of President Barack Obama.

Concerns over the strength of the economy in the U.S., coupled with the worries over the militants in Islamic State and the Ebola virus, are driving the negative moods of the country’s electorate.

Democrats might pay the price as voters are electing 36 senators and every one of the 435 members in the House of Representatives. There are also 36 states electing governors.

The name of Obama is not on this ballot, but his job approval is so low that voters have very little confidence in his leadership in his sixth year in the White House.

Polls show that Democrats are less enthusiastic about voting than are Republicans and history has shown that the party in power of the White House during midterm elections usually ends up losing seats.

Republicans in the House of Representatives are expected to increase the majority they already hold of 233 to 199 over the Democrats. They likely will also retain the majority they hold in governor seats in the state capitals.

However, the heavy action in campaigning has been for the Senate. Republicans need six seats to retake control from the Democrats and then control both of the chambers in Congress for just the first time in 8 years.

While Republicans are expected to gain Senate seats, many are still considered too close to call.

There is a strong likelihood that the party that will eventually hold control of the Senate would be unknown until Tuesday night.

The races in the Senate that have multiple candidates such as Georgia and Louisiana, where winners must win over 50% of the vote, might need to enter a runoff in December or even January.

If the Republicans take back control, the final two years of Obama’s time in office could be complicated due to the prospect of additional gridlock from partisanship.