Hillary Clinton On Torture Use 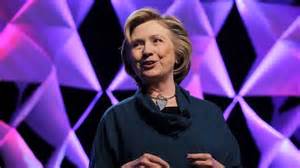 Hillary Clinton has spoken out against using torture during a speech on Tuesday in New York. She strongly condemned the tactics for just the first time since the recently report on the interrogation methods used by the CIA from over a decade ago that the Senate Intelligence Committee released.

Clinton said that today we could say in a voice that is loud and clear that the U.S. should never practice or condone torture anywhere across the globe.

The former U.S. Secretary of State was accepting a Robert F. Kennedy Center award for Human Rights and Justice and acknowledged that people in the U.S. were frustrated by the polarization and division in the country that often has seemed to block progress.

Clinton said that eliminating torture techniques should be both policy and the law, including in international treaty obligations. If it were to require new legislation, then the U.S. Congress should get together with the President and enact it quickly and this should not be affected by partisan politics.

Clinton added the U.S. is at its best when its actions match its values.

The former Senator said she had been proud to participate in the Obama administration and noted that interrogation tactics like brutal water boarding had been banned in an executive order of 2009 by Obama.

Yes, she said that the terrorism threat is urgent and very real, with dozens of children murdered on Tuesday in Pakistan, brutal beheadings in Syria and Iraq and a hostage siege in Australia.

The tragedies do not just break hearts but should make our resolve as strong as steel and underscore that our values are the things that set the U.S. apart from adversaries.

The statements by Clinton followed a poll that was released on Tuesday that found close to six out of 10 people in the U.S. believe the treatment by the CIA of suspected terrorists had been justified.

Close to half of those polled believe that the CIA used torture, while 53% think interrogations produced important information that likely would not have been obtained by any other means.

Just 31% of those that were polled reject that claim.