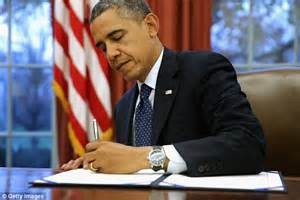 The new U.S. Congress has yet to be sworn in. However, President Barack Obama already has warned about his plans to veto in order to counter initiatives from the incoming GOP majority.

Obama, despite almost constant friction with Republicans in Congress the past couple of years, rarely has used the veto powers he has as president.

In part, that is because legislation he did not typically like usually died in the Senate that was controlled by the Democrats prior to it reaching his desk to be signed.

Obama said that there would be areas where he and Congress will disagree and the veto pen has not been used that often but the chances are there will be times it has to be used starting in January.

The agenda for the soon to be Republican majority could indeed set up a number of standoffs with the veto pen.

Amongst the top items for the new U.S. Senate is a bill that would force approval of the controversial pipeline Keystone XL as well as one imposing new Iran sanctions.

Though the bill with the sanctions could disrupt the delicate nuclear program negotiations with the Iranians, a Republican senator said on Sunday that the chamber might have the veto-proof majority it needs.

It is not clear yet whether Obama would veto a bill for Keystone, though he urges U.S. lawmakers to allow the process of review to run its course.

The president also suggested that he would mostly use the veto power to block the efforts to undo existing laws pushed by his current administration.

He said he would defend the gains the White House made in heath care and those made in clean water and clean air.

Mitch McConnell the incoming Majority Leader in the Senate said in response to the comments made by Obama that he urged Obama to work together with the incoming Congress.