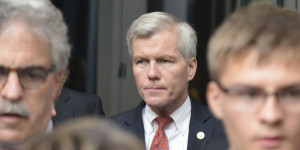 Bob McDonnell once had a political career that was very promising, tapped to give the Republican Party a rebuttal to the 2010 President Barack Obama State of the Union Address and considered a serious contender for the 2015 presidential race.

Now the former Governor of Virginia had to watch it all crumble in front of him, as he attempted to save his once bright reputation.

McDonnell and Maureen his wife, testified against one another airing out details of a failed marriage as the former governor attempted to explain his motivation behind thousands of dollars of bribes his family accepted that he said were more out of loneness than corruption.

Attorneys representing the former governor attempted to say the end of his career politically was punishment enough for McDonnell.

He handed in over 400 letters from former staff, family members, friends and politicians that attested to his good character.

He pled to the court for mercy.

However, nothing worked. He wanted a sentence of just community service, but was given two years behind bars.

The judge said the crimes McDonnell committed were too grave for him to skirt jail.

The case is possibly not over. Although the former governor was ordered to go to prison February 9, his attorneys have appealed the conviction and likely will attempt to keep him free during the appeal process.

He is now part of a long line of politicians that have been felled by different scandal.

In July of 2014, Trey Radel a member of the House resigned after his conviction for possession of cocaine. Michael Grimm a House member from New York pled guilty to charges of tax evasion and quit in January.

Other politicians have attempted comebacks but failed. Edwin Edwards, a four-term governor of Louisiana, was convicted of extorting millions of dollars from casinos. Following a lengthy prison term, he ran for Congress this past fall and lost in a run off to Garret Graves.

McDonnell will be free before he is 63, but likely will find it hard to return to politics.