Romney Signals an Interest in Running for President Again 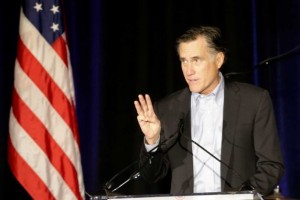 Mitt Romney on Friday was clear that he spent the past week conveying to Republicans in private across the U.S. that he is considering running again for the White House in 2016.

I am giving serious consideration to my future, said Romney to a group of other Republicans that had gathered for the winter meetings of the GOP.

Speaking below the deck of the Midway, a former aircraft carrier that was converted into a museum in San Diego’s harbor, Romney criticized President Barrack Obama and spoke of a campaign platform that was three-pronged should he decide to seek for the third time the presidency.

Romney said the campaign in 2016 should focus on making the world safer, offer opportunities for every American and lift people from poverty.

Under our current president, the rich have become richer, income inequality is worse and more people are now in poverty than at any previous time, said Romney.

However, Romney, whose campaign in 2012 was criticized sharply, also said that the campaign would be different and he would be a different candidate.

He said the 2016 campaign would not focus on the Obama years, but the post Obama period, hinting that facing Hillary Clinton in a race for an open seat would not be equal to attempting to unseat the first African American president in the country.

Romney did attempt although to link Clinton and Obama, He called the results from the Obama and Clinton foreign policy devastating.

Romney addressed 300 on the former aircraft carrier at the GOP event and received a warm welcome.

The interest of Romney in another bid for the presidency was first expressed last week to donors. It took people by surprise and might have slowed the Republican donors somewhat for other possible donors, most notably Jeb Bush the former Governor of Florida.

However, in the time since Romney revealed an interest in running again, there had been strong backlash amongst Republicans who prefer to have the party move on from its nominee in 2012.