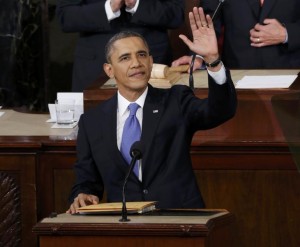 With both political parties on Capitol Hill fixated on coming up with new ideas to help the middle class in America, President Obama on Tuesday in his State of the Union Address called for free community college, more tax increases for the wealthy and paid and guaranteed sick leave.

During his first six years as President, Obama has been criticized by the state of the economy, with the GOP and even some Democrats suggesting the policies he has were not effective in helping the nation to recover from its recession.

Now with a drop in the federal deficit and strong job growth during the past 12 months, Obama has announced proposals for a nation that is no longer suffering from a crisis economically.

His address on Tuesday included a number of ideas that were targeted towards Americans in the middle class who have not yet benefitted from the growth in the economy.

One included a proposal to offer paid sick leave of seven days for workers who currently do not receive it now.

The plans are not likely to find traction in a Congress that is GOP led, but Obama provided the opening salvo in a debate that lingers over domestic policies and tax reform that will impact each of his two final years as President and the campaign of 2016.

With an economy that is stronger, candidates in the Republican Party must grapple with the middle class economics of Obama and will not be able to dismiss every one of these ideas.

Only one possible candidate in 2016, former Senator Jim Webb of Virginia who is a Democrat has officially formed a committee.

However, more than 12 Republicans are thinking about running, as are Hillary Clinton and a few others from the Democrats.

The recovery of the economy will make things more difficult for Republicans to adopt the approach they used in both 2012 and 2014 of bashing the White House at each turn, while offering little or no solutions of their own.

Obama has made the first move and now it is up to the Republicans to respond.