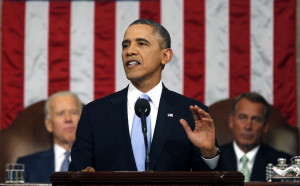 On Monday, President Barack Obama will give Congress his spending plan of $4 trillion for the 2016 fiscal year that includes billions of dollars in a request for public funds that are much needed in projects, an idea that has some bipartisan support but not much backing for his proposed increase in taxes to fund the efforts.

Obama is proposing a $478 billion six-year public-works program for transit, bridge and highway upgrades, with 50% of it financed by a one-time tax of 14% on overseas profits of U.S. companies.

That tax would be due immediately. Under the current law, the overseas profits are subject to federal taxes only if they are repatriated to the United States where they would face a 35% top rate.

Many companies avoid taxes in the U.S. on the earnings by leaving them overseas.

This tax is part of a broader plan by the administration to cut tax breaks of corporations and increase the taxes on the highest wage earners in the country to pay for projects to help the country’s middle class.

Members of Congress that is GOP controlled and other conservatives dismissed the plan since some elements were announced a number of weeks ago, which was part of a strategy by the White House to gain support prior to the State of the Union address by the president.

Paul Ryan the GOP Rep from Wisconsin the new chairman of the Ways and Means committee said he that he would be willing to work with the White House administration in an attempt to find common grounds between the two on certain tax reform aspects.

However, he did not approve of the budget plan of the president.

Obama’s proposed budget for this fiscal year that started October 1 will offer a myriad of tax increases and spending programs that Republican now running the Congress have dismissed already as nonstarters.

The budget calls for a tax of one-time on as much as $2 trillion in estimated corporate earnings of U.S. companies that have been accumulating overseas. Approximately $238 billion would be generated from that.

WOWswap Price Up 8.9% Over Last Week