White House: Obama to Ask Congress to Use Military Force against ISIS 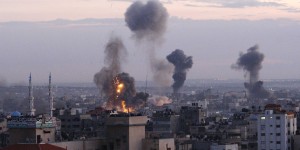 It is expected that President Barack Obama will formally ask the U.S. Congress to authorize military force against the radical militant Islamic State terrorist group. This comes even though many lawmakers believe that crafting then passing such legislation would be difficult.

The U.S. has carried out airstrikes on the group, most commonly referred to as ISIS, in Syria and Iraq since last August.

In doing that, Obama has relied on congressional authorizations that previous President George W. Bush used as justification for his military action following the Sept 11, 2001 terrorist attacks.

Critics however, have called the use of the post 9/11 congressional authorizations by the White House as a legal stretch, though Obama has openly argued that new authorization was not legally necessary.

The White House said on Thursday that it was dedicated to getting new authorization through bipartisan support. They declined to make a comment on the specific provisions, including the length the authorization would be in effect, what were the geographical areas it covered and whether it would allow for ground troops to be deployed. The White House said those types of details were still being worked on.

Nancy Pelosi the Minority Leader in the House of Representatives said that talks with the administration had been focusing on a time frame for authorization of three years, while other issues were still in the works.

Pelosi also said that she expects a compromise for the outstanding issues and added that she is hoping that Congress would repeal the congressional authorization of 2002 for the Iraq war while retaining the authorization for 2001 for military action inside Afghanistan.

These developments come following the release by the Islamic State’s of a grisly video of the killing of a pilot from the Air Force in Jordanian.

Pelosi insists that the U.S. needs to move quickly on this to steer military aid over to Jordan, which has started to increase a campaign that is against the militants, including airstrikes in Syria.

Republicans for the most part want broader authorization of military action.