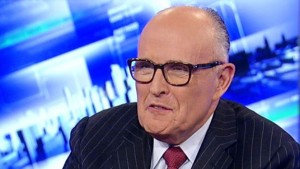 Rudolph Giuliani the former Mayor of New York City adamantly defended his criticism on Thursday of President Barack Obama only a day after saying he does not think the president loves the United States.

Giuliani made remarks on Wednesday during a private fundraiser for Scott Walker the Republican Governor of Wisconsin, who is considered by many to be a possible candidate for the GOP in 2016 for the White House.

He added that Obama did not love him or you as he was not raised that way and I was raised through love for this country.

His comments attracted widespread criticism from liberals and Democrats. However, on Thursday during an interview, Giuliani was asked if he wanted to apologize for what he said and the presidential candidate from 2008 doubled down on the criticizing.

He answered no and wanted to repeat it. He said the reality is that from what he could see of the president, all that he has heard is he apologies for the U.S. and criticizes the U.S. more than any other president.

Giuliani said he believes Obama does not believe in American exceptionalism, citing the president’s remarks on the tactics by police following the shooting in Ferguson, his long time relationship with Rev. Jeremiah Wright and the western atrocities in the name of religion.

However, his interviewer countered by saying many liberals do not believe in exceptionalism, but that does not imply they do not love the U.S.

Giuliani added that he did not feel the love for the U.S. from Obama. He feels Obama’s approach is to first criticize the country then to say a couple of nice things.

However, Giuliani did say he did not question the patriotism of the president. I know patriotism and patriots criticize, said Giuliani. They can criticize, but he does not hear from Obama what he heard form Harry Truman, Bill Clinton and even Jimmy Carter, which is the wonderful words about how great a country we have and what an exceptional country it is.