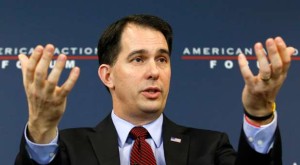 Scott Walker the Governor of Wisconsin and a presumptive Republican candidate for the presidential nomination, says he changed his stance on immigration and does not back any longer the comprehensive reform that allows undocumented immigrants to remain in the U.S. after being penalized.

On Sunday, Walker told an interviewer on television that his view had changed. In 2013, Walker said a plan where undocumented immigrants could become citizens in the U.S. by paying penalties and then going through a waiting period made sense.

However, he now is saying that plan is equal to amnesty, amidst criticism he has had flip-flopped on the issue and on others, including legislation for right to work, in his own state.

Walker said he did not believe in amnesty. On Saturday, Walker finished second in a straw pool for potential Republican presidential candidates in 2016 at a conference of Conservatives.

He added that the country must secure its borders and a new system must be put in place that works.

Walker is amongst the Republican governors, that number 25, who joined in a suit that is challenging the executive action of President Obama in December of 2014 that defers the deportation for millions of people who are undocumented immigrants.

After saying the Wisconsin Legislature’s right to work bill was a distraction during his re-election season in 2014, Walker now touts the plan, backed by the GOP, which essentially prevents unions from collecting any dues from workers who are non-union.

On Sunday, the Wisconsin governor said now was the perfect time for that bill to be passed and to be signed by him.

Walker attempted as well to clarify further his comment from Thursday during his CPAC speech. The conference is the largest yearly meeting of conservative activists and in his speech, he seemed to be comparing union-backed protesters he faced with the Islamic State.

He tried to explain that he was not comparing the two entities, but it was about the leadership he provided during what he called one of the most difficult times for any governor in the nation and that leadership would work well if he were elected president and had to face the IS.