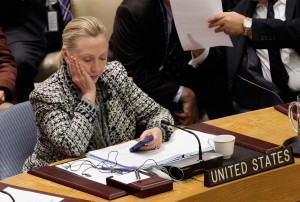 The State Department, the White House and the personal office of Hillary Clinton knew in August of 2014, that Republicans in the House had received data showing that Clinton had conducted official business for the government through her private email and the staff at Clinton’s office decided to keep it quiet.

Sources that are familiar with these discussions said key members of the Obama administration as well as those on Clinton’s staff had been aware that the revelation could become explosive for the possible presidential candidate. However, those involved decided to defer to Clinton’s aides and decided not to make a response.

In the end, the staff of Clinton waited a full six months until after an article was published on Tuesday about the personal email account and a possibility it hampered access by the public to official records, to start their response.

The slow defense by Clinton had left a number of political observers and strategists confused because even an early stage presidential campaign should be prepared to be ahead of any bad news.

Had the email address existence and the private server been made public during August, said observers, it would have been a marginal issue in the time before the mid term elections, which was lost badly by the Democrats anyway and in which the former secretary of state was not even a candidate.

However, letting it linger means it will cast a much bigger shadow over the expected campaign of Clinton. According to many sources, the problem became known during August as the State Department was preparing to respond to a House Select Committee request over the investigation of the attack in Benghazi, Libya of the U.S. consulate.

Some officials in the State Department noticed that some of the more than 15,000 pages of documents had included an email address for Clinton that was personal and White House and State Department officials conferred on what to do. In the end, the Clinton aides decided to wait and see what happened.

Clinton aides said they felt not rules had been broken and there was not concern, while Clinton this week tweeted that she wanted all emails from her tenure with the state department made public.