Prospective Candidates for the White House Spar over Law in Indiana 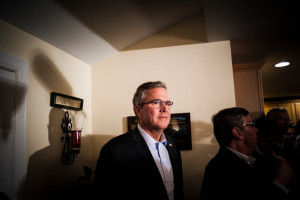 The controversy over the religious freedom law in Indiana has opened a predictable divide amongst the presidential race of 2016, as Republicans come to its defense while Democrats condemn it as discriminatory legislation against lesbians and gays.

Former Governor of Florida Jeb Bush, who is looked at with suspicion by a number of social conservatives for, amongst other issues, supporting national Common Core education, on Monday issued a complete defense of the measure and Mike Pence, the fellow Republican who signed it.

Bush said the law simply allows people of faith the space to express their own beliefs. Bush noted that his home state had a law that was similar and that once all the factors have been established, people will see it is not discriminatory.

Marco Rubio a senator from Florida, and another all but officially declared candidate from the GOP for the White House, echoed the support of Bush saying the law in Indiana was set up to ensure that citizens have the right to act upon their religious beliefs, but to harm lesbians and gays.

On Thursday, Pence penned his name to the law in Indiana, which allows owners of private businesses – a florist for example, who opposes the act of same sex marriage – the right to refuse service to certain individuals if it is a violation of their religious beliefs.

Nineteen other U.S. states have laws that are similar, but the one in Indiana has provoked fierce backlash across social media and national criticism from many civic and business leaders along with groups that have been threatening to boycott as well as protest to punish the state.

Just after the remarks of Bush, Ted Cruz the Republican senator from Texas who formally announced last week his bid for the presidency, issued a prepared statement that hailed Pence for holding his line and protecting the religious liberty in Indiana.

Democrats have criticized Pence and the law in Indiana. Hillary Clinton condemned the new law with a tweet sent out last week, although Republicans pointed out that former President Bill Clinton, her husband, signed 1993 federal legislation that served as a model for state religious freedom legislation.