Senator Menendez of New Jersey Indicted on Charges of Corruption 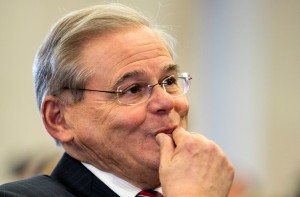 New Jersey Senator Bob Menendez, who is the son of Cuban immigrants, has become one of Congresses highest ranking Hispanics, was charged on Wednesday for accepting close to $1 million in gifts and contributions to his campaign from a friend of many years in exchange for a number of political favors.

Menendez said he would be found innocent of the charges and this would not be the way his career would end. He said these things in a defiant statement before cheering supporters and reporters Wednesday evening.

He added that he was not going to go anywhere and he was angry and set to fight because this contradicted his public service and his entire life.

An indictment by federal grand jury accuses the Democrat from New Jersey of using his political power in the Senate to benefit a wealthy eye doctor from Florida, Dr. Saloman Melgen who prosecutors said provided Menendez with airline travel, luxury vacations, golf trips as well as tens of thousands of in contribution dollars to a legal defense fund.

The indictment from a Newark based federal grand jury has 14 counts including conspiracy, bribery and false statements, against the Senator and charges Melgen a political contributor to Menendez as well as other Democrats.

Menendez will appear Thursday in federal court to hear the charges against him.

The criminal charges will cloud the future politically of the top Democrat and the former Senate Foreign Relations Chairman, who in the past has played a key role in matters on Capitol Hill involving the nuclear program in Iran and the efforts by the U.S. to improve its ties in the Caribbean nation of Cuba.

Two people who know the situation regarding Menendez but not authorized to speak about the plans of the senator publicly said  he would temporarily and voluntarily step aside from the role as the top Senate Democrat on that committee.

This indictment will certainly lead to a legal fight that will be drawn out over a long period between the Justice Department team of prosecutors and Menendez. The DOJ has spent at least two years if not longer investigating the Senator’s relationship with Melgen.