Lindsey Graham Almost Sure He Will Run 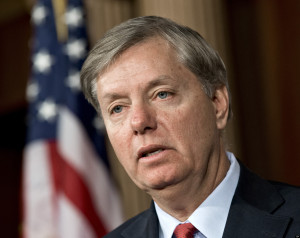 Senator Lindsey Graham from South Carolina said he was 91% sure, he would enter the race for the White House. The only question remaining is whether he could raise the needed money. He believes he has been right more often than wrong on foreign policy, is a problem solver and has something, he can offer both his party and the nation.

He added that his decision would be in May. Graham has been trying to raise money traveling across the nation meeting with his supporters while gauging interest in a bid. His supporters have established a super PAC to back his run and in the past have shown an ability to raise funds, by raising over $11 million in 2014 for his fight for reelection to the U.S. Senate.

However, a number of surveys of the GOP primary race in South Carolina have shown that Graham is trailing his possible challengers with one recent poll putting him fourth, with over 55% of those polled saying they would not vote for him.

The more centrist positions of the senator on issues such as immigration reform and climate change have GOP conservatives wary of his bid, but the senator insisted he would be successful in his own state if he ran.

He told a Fox channel news show on Sunday that if he did not think he could win his own state of South Carolina he would not even be talking to the talk show host.

He has always been a critic of the president’s negotiations over the nuclear program in Iran calling it this weekend very weak at a time that the U.S. needs to be very strong.

He also said on Sunday that if Congress were to be given the opportunity to approval a final nuclear deal, he does not see any chance whatsoever of it being approved.

He does not believe the framework of the deal the way it is would have any change of being passed by Republicans or Democrats.