Iowans Listen to Field of Candidates from GOP 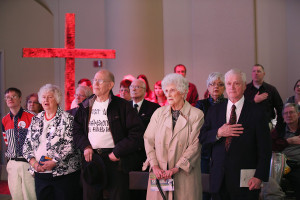 Christian conservative voters are pleased to find nearly too many options from the GOP. That myriad of choices is a wonder dilemma said voters on Saturday in Iowa and was on display as hopefuls from the GOP attempted woo evangelicals through remarks that emphasized freedom of religion and opposition to same-sex marriage.

Nine who have declared and prospective candidates for 2016 appeared inside a church to attend a forum that had been sponsored by a local coalition, drawing over 1,000 people from a state where significant sway is held by social conservatives in the state’s presidential caucuses that leadoff the campaign season.

The forum allowed the candidates the opportunity to showcase their conservative side with speeches on social issues and religious freedom that brought attendees to their feet clapping repeatedly.

Senator Ted Cruz from Texas noted that the U.S. Supreme Court was to hear the oral arguments for same sex marriage in four states on Tuesday. He said that between Saturday and Tuesday conservatives needed to drop to their knees and pray.

Cruz said the country needed leaders that would stand in defense unapologetically of life and marriage. Kentucky Senator Rand Paul spoke on abortion encouraging conservatives to show more aggressiveness in opposition saying he is tired of them retreating on the issue and it is time to push back. He argued as well that most Americans remained uncomfortable with procedures that were late term.

The forum offered the Republican contenders a platform to cater to the social conservatives with messages that did not always address a full range of views by attendees on social issues.

For example, both Paul and Senator Marco Rubio have not come out calling for a federal ban regarding same-sex marriage that some of the religious conservatives have called for. The senators say the question should be for the states to decide.

A number of candidates spoke regarding personal beliefs related to faith. Bobby Jindal the governor of Louisiana spoke of his conversion to Christianity and said he would look to protect religious freedom.

The turnout of candidates shows that the GOP is going to have a large number of people vying for the party’s nomination.