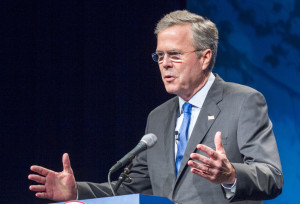 Jeb Bush is starting a trip through Eastern Europe for five days on Tuesday and is planning to use a speech on Tuesday in Berlin to promote trade ties between the U.S. and Europe. At the same time, he will use the time to criticize Vladimir Putin the Russian President over his aggression in Ukraine.

Europe and the U.S. have common interest in a steady opening of markets around the world, Bush is planning to say according to the excerpts his aides have released. He will add that what keeps the progress steady are the rules and standards that are transparent, modern and fair, which does not happen all be itself.

With regard to Putin, Bush is urging European and American allies to stand strong together to attempt to block the encroachment of the Ukraine pro-Russian separatists.

Russia must respect its neighbors’ sovereignty, Bush plans to say according to the excerpts. He will add, who can doubt Russia will do what it pleases if the aggression it carries out is unanswered.

The former governor of Florida is planning to say as well that the alliance, solidarity and actions are essential if we hope to preserve the fundamental principles of international order, one that free nations have had to sacrifice so much to make it what it is today.

Bush is scheduled to announce his campaign plans for the 2016 presidential election on Monday. He will give his remarks and then take questions prior to the Christian Democratic Party’s economic council meeting. The CDP is a conservative party in Germany that is led by Angela Merkel the Chancellor of Germany.

The talk starts his five-day trip that will take him to Estonia and Poland. He is scheduled to return to the U.S. Saturday.

The speech in Berlin will focus on economics and make reference to Right to Rise, the Bush Super PAC.

Bush is expected to announce on Monday that he is officially entering the race for the Republican Presidential nomination joining at least 10 others that have officially announced they are also running for the party’s nomination.