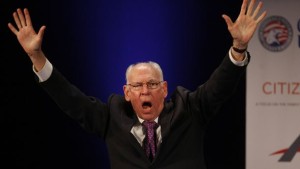 Rafael Cruz, Ted Cruz’s father, is an evangelical pastor. He is a Cuban-American who is 76 years old and fled Cuba and the Batista regime during the 1950s.

He is a very practiced speaker who can bring evangelicals up to their feet, which is a powerful weapon for son Ted in one of the biggest battles within the GOP nomination contest: the fight for the religious right vote.

Rafael Cruz said Americans have the responsibility to elect righteous leaders, it is time we become once again Biblically correct rather than being politically correct.

His son’s campaign could carry some risk relying on his father. Rafael Cruz’s Bible laced passionate rhetoric and the provocative barbs of conservatism could upset some swing voters the senator from Texas needs for his appeal to be broadened.

In one speech, Rafael Cruz compared U.S. President Barack Obama to Fidel Castro the former Cuban President. He said that social justice was a concept of the Marxist. He linked violent crime and teen pregnancy to the Supreme Court decisions that took the Bible and prayer from public schools.

He is one big fireball said a conservative pastor who is not committed yet, as he said he is not that comfortable with some of his hyperbole.

During an interview, Ted Cruz said he was not concerned in the least about negative reactions to his father. He said that the Democrats as well as other critics were only trying to turn his father into one big political lightning rod through quotes taken out of context.

Cruz is not the only GOP candidate whose profile has been influenced by family ties.

Former governor Jeb Bush has a close relationship with two former presidents – his father and his brother, which gives him access to a huge network of fundraising and prominence.

However, he is also burdened by questions about the unpopular policies of his brother, such as the involvement of the U.S. in the Iraqi War.

Rand Paul a Senator for Kentucky appears to benefit from his father’s grass roots following. Former Representative Ron Paul is a libertarian who ran twice for the presidency.