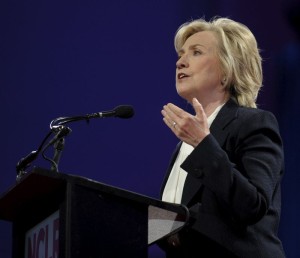 Hillary Clinton the Democratic presidential candidate said on Tuesday night that she supports the nuclear agreement that the Obama administration made with Iran to freeze its current nuclear program in exchange for the lifting of crippling economic sanctions.

Clinton said she supports the agreement because she believes it is the best path of all the other alternatives available to the world powers to prevent the Islamic Republic of Iran from acquiring its nuclear weapon.

In a statement on Tuesday Clinton went further than remarks made earlier in the same day when she stressed she needed to learn more about the details of the deal.

She said Tuesday midday that based upon what she knew at that time, the deal was a big step in putting the lid on the nuclear program in Iran.

In the latest statement, Clinton added that the details were still being studied, but based on briefings she received and reviewed of the myriad of documents, she supported the nuclear deal because it could help prevent Iran from having a nuclear weapon.

Given the past behavior of Iran, added Clinton, the highest priority it to be given to the effective enforcement of this agreement, as the signing is only the beginning.

She argued that the experience she had in shaping the deal while the secretary of state would help enforce it if she were to win the presidency in 2016.

While Secretary of State, Clinton said she logged thousands of miles as well as twisted numerous arms to build a coalition to impose the most crippling economic sanctions in history.

She added that the pressure delivered a huge blow to the economy of Iran and gave the world powers the leverage needed at the negotiating table.

While Clinton gave her endorsement of the agreement made with Iran, the Republican National Committee suggested the frontrunner of the Democrats was attempting to maintain an ambiguous position.