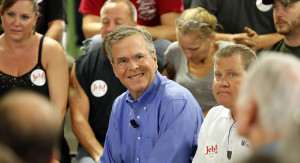 Jeb Bush the Republican presidential candidate has purchased his first set of TV ads for his White House bid. The ads will target the state of New Hampshire, said his campaign team on Friday, which underscores his need to be successful in the state where his rival Ohio Governor John Kasich has made inroads.

The initial buy of $500,000 would include broadcast television in Boston and station WMUR in New Hampshire, said a spokesperson for Bush.

Ads will begin running on Wednesday September 9 and will continue through the end of the month. Targeted advertising online would also be a part of that.

The primary in New Hampshire next February 9 follows the February 1 Iowa caucuses that will launch the nominating contests for the two parties for the presidential election in November of 2016.

The ads will focus on the strong conservative record on reform and Bush’s plan to change Washington’s culture.

Bush has had a visible feud during the week with fellow candidate Donald Trump, the GOP frontrunner for the presidential nomination.

However, Bush is also keeping a very close eye on the Ohio governor.

John Kasich who is completing for the establishment Republicans with Bush has already aired ads on television in New Hampshire and has frequently made visits to the state.

Kasich and Bush are about even in many opinion polls of GOP voters in the New England state. Many voters are stating that both men are their No. 1 choice and both men need to have strong results in New Hampshire since they lag behind in Iowa.

Bush, the former governor of Florida, told reporters Thursday while visiting Laconia, New Hampshire that he felt good about where he was in the polls in spite of the summer popularity of Trump the real estate magnate.

Bush said that people as they near the elections will start thinking who will sit better behind that big desk, who will make the tough decisions, who has track record that is proven. He added that he could make a strong cased over the long term he is that person.

$2.06 Billion in Sales Expected for Marathon Oil Co. This Quarter