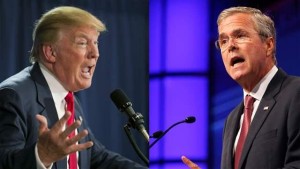 Donald Trump the frontrunner of the Republican presidential candidates again provoked a back and forth tossing of barbs on Friday by saying George W. Bush the former president must share part of the blame for the attacks of September 11, 2001.

Trump has made it obvious he dislikes the Bush family and frequently has baited his current rival Republican candidate and former Florida Governor Jeb Bush, who is George W’s brother, and made his latest controversial comment in a televised interview.

Trump said on a cable television channel that when you speak about former president George Bush, say anything you want but the attacks that brought down the World Trade Center were during his watch.

When Trump was told by his interviewer that he could not blame the former president for that, Trump would not back down an inch.

He responded by saying he was president. People can blame him or not, but at the time he was the president. During his term in office, the World Trade Center came down. The two towers crashed to the ground on 9/11 after Islamist militants hijacked airplanes and crashed them into the twin towers.

The outburst by Trump was similar to the comment he made last summer that John McCain the Republican Senator was not a war hero because he was captured while serving in the Vietnam War.

Sen. McCain, the Republican presidential nominee in 2008, was the pilot of a fighter jet during a bombing mission over the city of Hanoi when he was shot down. He then spent over five grueling years in one of Vietnam’s prisoner of war camps.

Generally, George W. Bush is given high marks from Americans due to his response to the attacks of 9/11 and for preventing an attack on U.S. soil ago during his two terms in office.

After hearing Trump’s comments, Jeb responded on Twitter by saying how pathetic for Trump to criticize a president of 9/11. He added that the country was attacked and his brother kept everyone safe.

Even with his controversial rhetoric, Trump still leads the Republican field of 15 candidates.

State of Alaska Department of Revenue Has $6.85 Million Holdings in Tyson Foods, Inc.