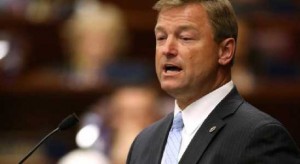 Late last week the U.S. Senate approved on a party line a budget bill repealing Obamacare and defunding Planned Parenthood. These are two priorities that are at the top of the list for Republicans who are in control of the chamber.

As not to be outdone, the Democrats took over the debate in an attempt to force votes on legislation on gun control that could put Republicans in a tough position politically as the nation is reeling from the recent number of mass shootings.

By voting to repeal Obamacare, the GOP leaders fulfilled a pledge for a long time to voters as well as rank-and-file members to get a repeal to the desk of the President even though he will veto it

Leaders with the Republicans also want an unmistakable answer sent to voters. If you elect a president from the Republican party in 2016, and keep the same congress members in charge, Obamacare will disappear.

Senator Jeff Session of Alabama said that it demonstrated that if you have a president prepared to support the need reform of the health care law, it could be passed in the next session.

The legislation would cut off all federal funding for Planned Parenthood, which is the women’s health group providing different things for women who are pregnant or trying to become pregnant, including abortions and has for many years come under the scrutiny of GOP members.

The passion by the Republicans to cut taxpayer dollars to the organization has increased the past few months.

While the House and Senate have voted a number of times repealing portions of the bills, this would mark the first time  they have used a special tool known as the budge reconciliations that allows the measure to be cleared with only 51 vote, which is less that the threshold allowed for Democrats to block pass efforts of repeal.