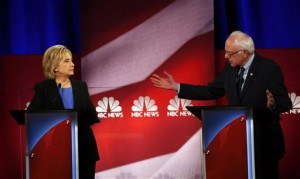 Bernie Sanders the Senator from Vermont who is becoming more and more popular amongst Democrats was asked during the South Carolina Democratic Debate on Sunday night if he regrets saying that former President Bill Clinton’s past indiscretions were deplorable.

The question did not amuse Sanders at all. He answered by saying that the question annoyed him, saying he could not take a walk down the street without being told how he has to attack Hillary Clinton.

Sanders cited the goading he is always facing to attack Clinton for the previous comments, something he said he tries to now avoid.

However, Sanders on Sunday night doubled-down on previous comments he made during a town hall in Iowa that that the comments of the former president were disgusting.

On Sunday night, he said that yes former President Clinton’s behavior was deplorable, but I will be debating Governor O’Malley and Secretary Clinton on the issues the American people are facing not the personal behavior of Bill Clinton.

Early in Sunday’s debate, Secretary Clinton made the comment that her husband would advise her if she were elected to the White House.

She said jokingly that it would start first at the kitchen table and see how it goes from there. However, then she became more serious and said she would ask her husband for ideas, for advice and as a emissary of goodwill to go across the country to find great ideas.

Hillary Clinton used the last debate prior to voting in Iowa and New Hampshire as a way to make her case to supporters of President Obama, who some allies of Clinton worry could be shifting toward Sanders.

She needs them so she can build a winning coalition that is capable of taking the nomination for the Democrats and then mounting a race against the Republican candidate for the November general election.

Both Mr. and Mrs. Clinton joined their supporters following Sunday’s debate at a party.