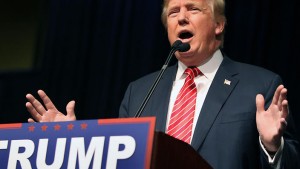 Voters in New Hampshire might be stunned when they hear the latest robocall asking for their vote; white nationalists with a disturbing yet simple message.

On telephone calls that New Hampshire residents are receiving, the voice on the line says we do not need Muslims. We need educated, smart white people. The calls started this past Thursday and urge New Hampshire voters to get out and vote for Donald Trump.

Three separate white nationalist leaders banded together and formed a super PAC of their own in supporting Trump, even though the candidate does not want support from them.

The American National super PAC has funded a robocall effort that has been organized under a different group named the American Freedom Party.

On the American Freedom Party website, it says the group shares the heritage and customs of European American people.

It is unclear the number of homes in New Hampshire would be receiving the calls. Robocalls of a similar nature were placed prior to the Iowa caucuses.

An online editor for a media outlet of the American Renaissance, a white nationalist group, is a voice on the robocall.

This same editor is also a spokesperson for a group known as the Council of Conservative Citizens, which is considered widely to be white supremacists, although they say they are just a white rights group.

The group goes back decades and said to have inspired Dylann Roof, who confessed last summer to fatally shooting 9 people at a South Carolina church.

When he was asked, the editor said he preferred to be referred to as a white advocate and not a white supremacist or white nationalist.

That is why, he added, that when Trump talks of sending all illegals home and putting a moratorium on immigration of Muslims, it is appealing to many white people.

America’s Car-Mart, Inc. Given Consensus Rating of “Hold” by Analysts

Vermilion Energy Inc Given Average Recommendation of “Hold” by Brokerages

Munchener Ruckvers Given Average Recommendation of “Hold” by Brokerages