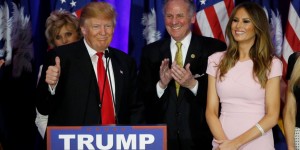 Donald Trump had a week insults during his campaign for the Republican presidential nomination, but finished it off with a strong win in the South Carolina primary.

The win was the biggest evidence to date that his campaign is headed toward winning him his party’s nomination.

None of the rivals battling with Trump were close to beating him, despite his week of polarizing comments.

There is nothing easy when it comes to running for president said Trump to a crowd of supporters Saturday night. It is tough, it is nasty, it is mean and it is vicious.

However, when you are victorious it is beautiful and we are winning for the country.

The biggest loser on the night was Jeb Bush the former governor of Florida an epitome of the Republican establishment, the one time front-runner who has now dropped out following a third straight state that rejected his type of mainstream conservatism.

Ted Cruz the Senator from Texas, who is running like Trump as an agitator of the party, battled Florida Senator Marco Rubio for second place.

John Kasich the Ohio governor, who was in the single digits, is making a case that his campaign will pick up when it heads to the Midwest close to home.

Evangelicals were the dominant voters in the electorate accounting for 75% of the voters.

Even though Cruz and Rubio battled for the evangelicals’ votes, Trump was able to win the largest share.

Bush entered this race in 2014 as the party’s front-runner and attracted the most funding and endorsements than other candidates in what was a field of over a dozen.

If Cruz is to beat Trump, he will need to earn wins in a number of the southern states on March 1 and hope that other contenders leave the race.

However, the senator in the end will have to persuade more voters to embrace the pure form of conservatism while rejecting Trump as an imposter a case that he has attempted now for weeks.