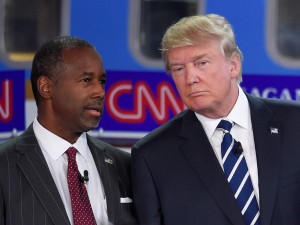 Ben Carson, the retired neurosurgeon who ended his bid for the presidential nomination last week, has announced his endorsement of Donald Trump during a Friday news conference.

Carson called Trump an intelligent man who has a deep caring for the United States.

The announcement comes the morning after the debate on Thursday that were subdued compared to other debates and where Trump announced on stage during the debate that he had landed the support of Carson.

During this campaign, especially when Carson experienced a brief uptick in popularity, the businessman from Manhattan clashed with the candidate, questioning the doctors religion, comparing the doctor to a child molester and calling him “super low energy,” one of Trump’s favorite insults.

When asked about the past criticism by Trump of him, Carson said the hatchet had been buried, as it was only political stuff.

However, Trump publicly defended Carson after the Ted Cruz campaign spread false info that Carson was going to drop out of the race prior to the Iowa caucuses.

The support from Carson, who is popular amongst evangelical voters, might help Trump woo that group, who remain a big part of the base in the Republican Party,

When asked if Carson would campaign for Trump, and be sent out to help him win the black voters, a Trump representative dismissed the question.

He said he believed that Carson would campaign for Trump, but the campaign has been clear about not attempting to segregate specific demographics, said the Trump aide.

He concluded by saying the message was the same for all which is making America great again.