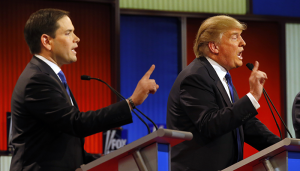 In one poll, Rubio has even fallen back to third place behind Texas Senator Ted Cruz. At the same time, John Kasich the Ohio Governor is locked in a tight race with Trump in his home state of Ohio prior to the crucial Tuesday primary.

The most recent Marist/NBC poll showed that Trump was dominating Rubio with a lead in double digits 43% to 22% in Florida. That same poll has Cruz almost tied with Cruz at 21%.

Another poll by CBS News has Rubio even slipping behind the Texas Senator.

Meanwhile, a Marist survey in Ohio shows that Kasich is holding an edge in his Buckeye State at 39% to 33% for Trump.

The most recent Quinnipiac poll has Trump tied with Kasich at 38% apiece.

The Florida and Ohio primaries, amongst the five being held Tuesday, are for all intents and purposes must wins for Rubio and Kasich, respectively as both trail Trump and Cruz significantly in delegates.

Rubio’s fall across the polls appears as if it is another indication his campaign could be over soon.

On Sunday, Rubio continued criticizing the violence at rallies Trump holds, saying the protesters and the candidate are equally to blame.

Trump has a number of popular golf resorts in Florida. He has kept his lead in the primary for the state, which is winner take all for the 99 delegates it represents.

During a rally in Ohio on Sunday, Trump attempted to portray Rubio as a senator who was unpopular and who had been elected during 2010 to go to Senate but has repeatedly missed votes to campaign to further the career he has politically.

On Sunday, Trump hit out at Kasich at different rallies, including one in the area of Cincinnati for voting when a congressman in favor of NAFTA that is considered to have taken million of jobs, many in manufacturing, and in the Rust Belt states of Illinois, Michigan and Ohio.