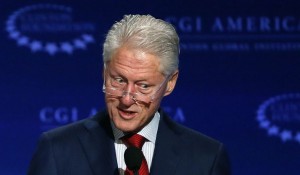 During an appearance for his wife’s campaign, former President Bill Clinton called the past eight years an awful legacy. Clinton made the remark in Spokane at an event prior to the Washington state caucuses for the Democrats on Saturday.

Clinton said that if you believe we have reached the point to put the awful legacy of the past eight year behind us, and the seven years prior to that when we practiced trickledown economics with no regulation in Washington, which was the cause of the crash, then you should vote for Hillary Clinton.

Those remarks appeared as if they were directed at President Obama, in whose administration Clinton’s wife served as the secretary of state and the policies she had come to defend in her primary campaign against Bernie Sanders the senator from Vermont.

Republicans seized on Clinton’s statement quickly posting a video of his remarks online.

However, a spokesperson for Clinton said that the former U.S. president had been referring to the Republicans in Congress when he made the remark “awful legacy.”

The spokesperson said that after President Obama had been elected, Republicans made it their biggest goal to block him every step of the way.

The unprecedented obstruction by the Republicans has lasted the eight years, is their legacy and the people of the U.S. should reject that by making Hillary Clinton the next U.S. President, added the spokesperson.

Hillary Clinton leads Sanders by over 300 delegates in the race for the presidential nomination for the Democrats after sweeping five states on March 15.

In addition, holding Democratic caucuses on Saturday are Hawaii and Alaska, but the most delegates that are at stake are in Washington at 101.

Clinton and Sanders have been battling alone for most of the past two months and the way the delegate counts are made, could battle almost to the national convention this summer before an actual winner is determined.