Bernie Sanders Will Not Drop Out Despite Lead by Hillary Clinton 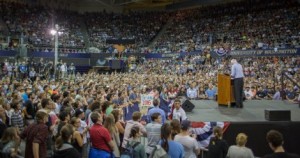 Vermont Senator Bernie Sanders is not going to leave the Democratic Presidential race despite the large and almost unbeatable lead held by Hillary Clinton and Tuesday night was a hint why. However, the path ahead for the underdog carries many challenges and a number of risks.

Even though the Vermont senator lost in Arizona, where he has invested the most time and money, Sanders ended up with 17 delegates more on Tuesday that Clinton, due to his lopsided wins in both Utah and Idaho.

Sanders on Saturday hope to win a higher percentage of delegates in the state of Washington, which holds the country’s largest caucus with 101 delegates to win. Hawaii and Alaska also are holding caucuses, which Sanders is also hoping to win.

Winning 58% of the pledged delegates that remain will be a difficult task and still would not earn him the party’s nomination, since Clinton has such a huge lead amongst the superdelegates.

However, it is doable nevertheless and that is why Sanders has pledged to move forward. One of his strategists said that if the campaign can demonstrate he is the candidate that is the strongest by defeating Clinton in these states, a number of superdelegates would take the time to think what is the correct thing for me today? In addition, at that time, the campaign of Sanders will try to persuade them to change.

Winning the majority of all the delegates, including the superdelegates and winning the Democratic nomination outright requires Sanders to win two out of every three remaining delegates that are pledged through the last primary in the campaign.

That scenario is nearly impossible, allies of Sanders acknowledge. Winning just a majority of pledged delegates is a difficult task, they added.