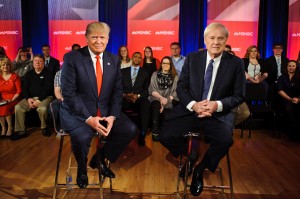 Donald Trump the front-runner for the Republican presidential nomination said Wednesday that women who end their pregnancies should be punished if the U.S. places a ban of abortion.

His comments triggered a flood of criticism from each side of the heated abortion debate, including from his rivals for the White House.

The New York billionaire pulled back on some of his remarks following the broadcast of his interview on MSNBC. First, he said that the issue of abortion should be handled individually by each state, and later that the doctors who performed the abortions should be held responsible.

The doctor or any person performing the illegal act of abortion would have to be held responsibly legally, not the woman who was pregnant, said Trump in his final statement. In this case, said Trump, the woman would be the victim.

Earlier statements by Trump drew big criticism from supporters of abortion rights and opponents as well.

Abortion has been a very divisive issue for a long time in politics in the U.S., even though the procedure has been legal for over 40 years in a ruling by the Supreme Court.

Trump has earned support from voters in the Republican Party for coming off as an outsider in Washington. However, in New York the tycoon, who once was a supporter of abortion, has been under pressure by conservatives to prove he is one. He has also taken criticism for the comments he made that offended minority groups as well as women.

Women should not be punished said John Kasich a rival of Trump’s in the GOP. He said that he opposed abortion except in cases such like rape.

Ted Cruz the U.S. Senator from Texas and in second place behind Trump said Trump did not think the issue through.

What becomes neglected far too often said Cruz is that being pro-life is not only about the child that is unborn, but also the mother.