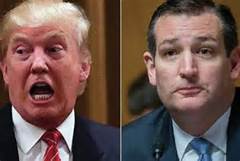 Republican presidential candidate Donald Trump has hit a difficult patch during the past two weeks prior to the Wisconsin primary on Tuesday, where he now trails U.S. Senator Ted Cruz in polls across the state.

A Cruz victory would demonstrate his appeal has grown and would be another indicator of damage to the candidacy of Trump.

Trump must gain momentum following a very bad week, said on strategist with the Republicans, while Cruz needs this primary to demonstrate he can win a large state primary other than Texas.

Even if Trump does not win the statewide count of votes and the delegates they represent, he could still lessen the damage through winning in districts seven and eight, which are predominately blue collar, and rural covering much of the northern half of the state.

If Trump wins both of the districts he could take six of the 42 delegates in Wisconsin, that might not sound like that much, but every delegate in this race is so important if he is to avoid a contested convention.

If Trump has any opportunity to win delegates in the sparsely populated areas of Wisconsin, he looks the most vulnerable in the suburbs that are more crowded around the city of Milwaukee.

However, a bigger question is if Trump’s problems amongst the middle-class, college-educated voters in the southeastern part of the state are confined to only that region.

Following Tuesday’s primary the Mid-Atlantic and Northeast are the next primary areas with New York, Connecticut, and Maryland, where the suburban areas are the largest electorate of the Republicans.

If resistance from white-collar GOP members to Trump rears its head there as well, several states he was expected to dominate could turn up being up for grabs.

The weak poll numbers for Trump in Wisconsin have created questions about if he might be starting to lose ground after a number of errors in this campaign and unfavorable coverage on the news.