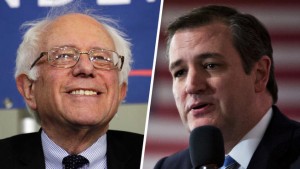 Republican U.S. Senator Ted Cruz recorded a decisive win over fellow presidential contender Donald Trump on Tuesday in Wisconsin, giving the senator renewed momentum during a very crucial time while putting more pressure on the GOP front runner to show he is able to absorb a loss and come back in upcoming primaries.

Cruz dominated the Wisconsin vote Tuesday, which is a sign he is viewed more and more as the main alternative to Trump by Republicans unable to support the billionaire. Cruz’s win increased the changes there could be a contested conventions for the GOP in July.

Cruz told supporters that the victory in Wisconsin was incredible while being joined on stage by Scott Walker the Governor of Wisconsin. Tonight Cruz said was the turning point and a rallying cry.

For the Democrats, Bernie Sanders the U.S. Senator from Vermont easily beat Hillary Clinton the front runner in the Wisconsin vote, adding to the frustration of Clinton that she has not put away her biggest rival to date.

However, despite winning six of the past seven states Sanders faces a huge task in trying to overtake Clinton as the nominating races now move into New York and five other states in the east.

However, his victory was yet another sign a sizable number of Democrats are not completely sold on Clinton’s candidacy.

The pressure for Trump is to respond with decisive victories in states coming up to show he can assemble the delegates needed to take the nomination prior to the convention convening.

Trump is heading toward favorable ground in the Northeast and was predicting more victories. It is very critical he succeed in the states.

Trump, who campaigned heavily across Wisconsin and responded to Tuesday defeat by attacking Cruz saying he was helped by ads spent against him, radio talk show hosts and independent funding groups.

He called Cruz worse than just a puppet. He is the Trojan horse, used by bosses in the party attempting to steal the nomination from Trump, said Trump’s campaign.