Larry Hogan Republican Governor of Maryland Will Not Vote Trump 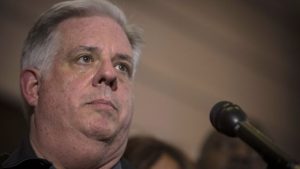 Larry Hogan the Governor of Maryland and a Republican returned to Prince George’s County on Wednesday, the place he was raised and where he tasted politics for the first time while working on campaigns of his father.

The Maryland governor officially went to the stronghold of the Democrats to announce the funding of many road projects close to National Harbor.

However, he could not escape the politics that followed him both at a state and presidential level. This is a county where during his election he won less than 15% of the overall vote during 2014, much less than in any other Maryland jurisdiction.

During his first stop, Hogan was asked if he was planning to vote in the general election for Donald Trump the presumptive presidential nominee for the Republicans.

Following months of refusing to answer directly that same question, the popular GOP Governor said that no, he was not planning to vote for Trump.

He added that once he is behind the curtain in the voting booth he would figure everything out, maybe writing in someone, but he remains unsure.

Hogan was accompanied at a number of stops by local and state Democratic lawmakers.

Hogan put a great deal of focus on this day on nostalgia as well as one what he commented were bright aspects of the future of the county, including $115.5 million in road improvements close to the riverfront resort National Harbor and the planned grand opening of a casino later in the year.

The project related to transportation will affect the congested roadway close to National Harbor and consists of building a big interchange to help alleviate traffic. Residents have been pushing to have improvements done for many years.

Hogan also paid a visit a pair of classes that were dual-enrollment at the Prince George’s County Community College, where students from high school take curriculum that is combined high school and college at the same time.

The governor, who Tuesday made an announcement of the launching of two six-year high schools for Baltimore, said he was hoping to provide additional educational options that will blend both high school and college-accredited classes.

Throughout the day, the news that followed the Governor was the announcement he made that he would not vote for Donald Trump.